Except for a year and half of rugby in high school, I’ve always gravitated toward more-or-less individual sports—skateboarding, running, martial arts, and, in recent years, triathlon. My default sphere of comfort and control extends a couple feet away from my body. I have few close friends, I tend to think of myself as self-reliant, I’ve been called solitary, distant, intense (appellations over which I exercise a certain degree of romantic pride, though in reality it’s dysfunctional and likely the product of an emotional diet of Cap’n Crunch during my formative years).

And as I say, so it is with sports. I prefer to hold the controls. Even in triathlon, if I have a mis-shift on the bike, the fear it potentially signals something more sinister is about to happen often makes me think, ‘Fuck I can’t wait until I’m off this untrustworthy p.o.s. and in my running shoes.’ Smaller sphere of control, right?

Then something like this happens. A work colleague, Ray, floated the idea of entering the Confederation 150k Relay about a year ago. I indicated I’d be happy to participate, and suggested a number of folks at work who’d probably also be interested. So, we put together a team of 8 runners, met a few times in the months leading up, sharing responsibilities and hammering out the details along the way. We needed to know who was able to run which legs (obviously); we needed to know what their best time estimates were (you always want relay runners to estimate on the fast side, because if they estimate slow and then run a PB, the person they are supposed to hand the timing chip to may not even be out of bed yet); and we needed to sort out logistics (who’s picking up the race bibs, going to race briefings, etc.). 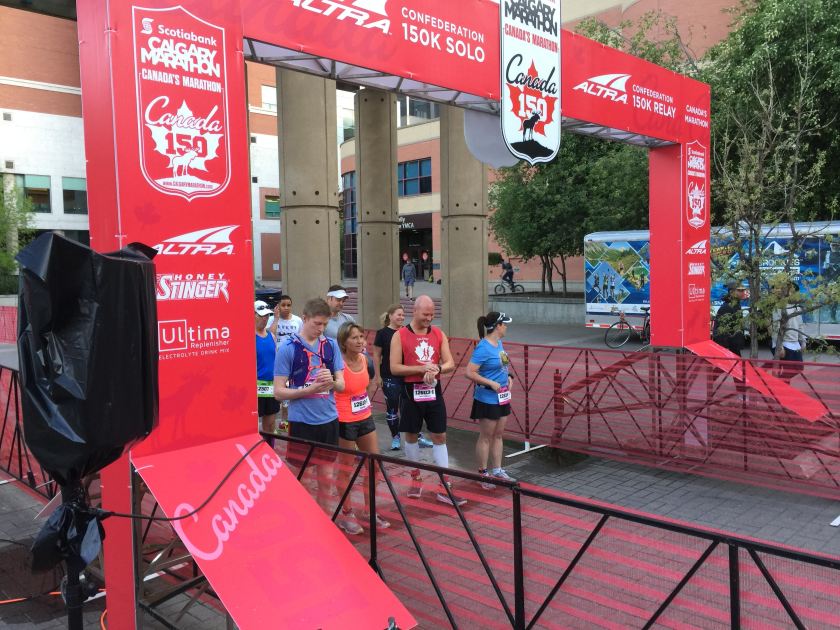 By race eve, we had everything sorted. On 9 p.m. on Saturday night, I went to the start line to see our first runner, Susan, off. Her leg was a 10.9k point-to-point run along the paths of the Bow River, which meant I had time to head over to the transition point, see Ray off (who was doing legs 2 and 4), and then head home with lots of time to sleep before the 30k anchor leg at (by our estimates) 8:28 a.m. the next morning. In the transition area, I also saw Carl, our third runner and a strong endurance athlete. Carl had been stricken with some sort of bug a few days’ prior, but was feeling up for his two 10.2k legs, 3 and 5.

I got home around 10:30 p.m., and was in bed asleep by about 11. At 2:50 a.m. I woke up for no reason, and checked my phone. There was a string of new text messages in the group conversation we had set up for the runners the day before. Carl—the one who was getting over the bug–started vomiting about 4k into his first leg. The poor guy mustered the will to finish leg 3, but wouldn’t be able to do leg 5. Fortunately our fourth runner, Kelly—who was originally supposed to start at 1:13 a.m.—was following the text chatter, and said he would come early to do the vacant fifth leg and his two other 10.2k legs, 6 and 7.

At the time I had read the texts, he was starting out on his second leg, and I thought to myself, ‘Damn, he’s not trained up to do 30k; this could be dicey.’ But then again, just a few days before the race, I had posted our team’s bios on our company intranet, including this: “Need someone to volunteer for a push-up, stunt food, or running contest with less than 24 hours’ notice? Kelly’s your man.” And, true to form, he did all three legs (at a svelte 210 pounds). We’d lost a bit of time, but we were still in the race.

By the end of the 10th leg, we were 32 minutes off our own goal pace. Although we didn’t know it at the time, we were 15 minutes behind the first place team, the Calgary Roadrunners, and 17 minutes behind the second place team, the Osler Outlaws. There were just two legs left, but they were long ones—still a full 50k to go. For this relay, the organizers force-started all the 11th leg runners at 7:00 a.m., and our seventh runner, Ian, estimated his race pace exactly, executing a swift 20k and putting him at the hand-off area exactly at 8:28 a.m., just as planned. Now we were only 11 minutes down from Osler’s, and 12 minutes down from the Roadrunners, who had swapped the first and second place positions.

Now, I’ve been battling an MCL injury for months, and a few weeks’ prior to the race I had serious reservations about being able to do my leg. My relay colleagues knew about the injury, and didn’t have any concerns if I ran a slow race. However, when Ian came to the hand-off area right on schedule, not only was I inspired (I even gave him a hug–highly uncharacteristic behavior for me), I also felt a new sense of obligation and commitment. He held up his end of the deal. Now it was my turn. 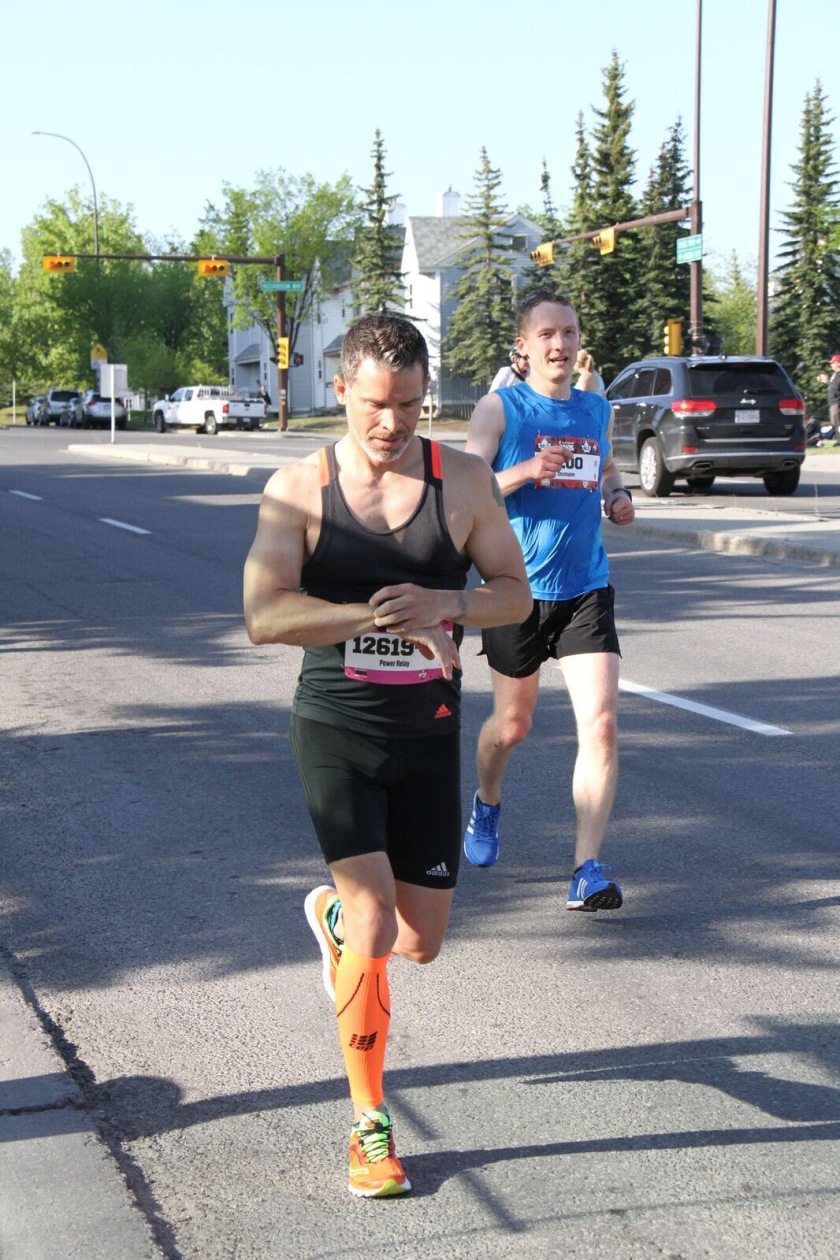 So off I went. Immediately I felt the pain in my knee, and one of my calves (which had started giving me grief in the days leading up to the race), but after about a kilometer, the pain leveled off some, and I settled into a pace that was about a minute faster per kilometer than my original estimate. Second kilometer, I looked at my watch: same pace. Third kilometer: same pace.  ‘This could work,’ I thought to myself. Because I’ve done some hard bike camps recently, my cardio was in good shape, and physiologically I could feel my body urging me to hit the accelerator; however, the relative lack of specific run fitness, coupled with my MCL and calf issue, meant my legs would be the limiter here, so I stuck the needle right at the mechanical redline, just beyond which it felt like I’d blow my legs apart. No one else sandbagged their run. Neither would I.

I ticked off the kilometers. Five, ten, fifteen, twenty. I didn’t see any other relay teams out on the course; however, when Ian originally handed off to me, I did see a handful of relay team runners waiting, so surely there were some behind me. Around kilometer 26 my perceived effort started to climb, so I had to lean in a bit for those last few k’s, but I held onto my pace and finished about a half hour ahead of schedule. The volunteer who put the finisher’s medal around my neck said, “You’re our first relay finisher!” ‘That’s great,’ I thought, ‘but we still need to add it to our 100k time.’ Well, as it turned out, we had put seven minutes on the Roadrunner’s overall time, and eight minutes on Osler’s, taking first place overall. 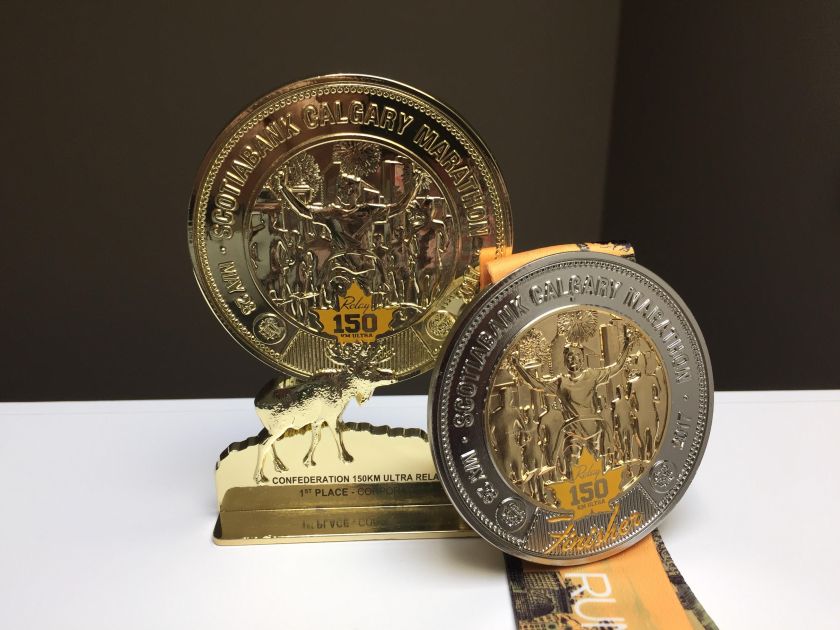 This goes down as one of the most memorable races I’ve ever done. Not because of the win, but because we won. As a team. I didn’t really appreciate the significance of this until I saw that string of text messages at 2:50 a.m.—until I realized everyone had the same goal, and everyone was working together to achieve it, which we did.